So Courtney Scaramella didn’t want to wear a sexy schoolgirl skirt, so now she’s in the news, alleging in a lawsuit that the Westwood bar (O’Hara’s) where she was waitressing fired her after she objected to the dress policy in writing?

Well, Courtney, you might have a case. (The bar says she doesn’t.) But you might also have to stand in the sexy-outfit complaint line. Because your former place of work is one of many in the L.A. area that appear to require, or at least encourage, sexually suggestive work clothes.

5. Geisha House. Well, the outfits here aren’t so much skimpy as just awkward. Hostesses wear full-on geisha outfits, heavy makeup and shuffle-worthy geta sandals. You’ll get more eye candy from the hot bodies that come here for the stiff drinks at happy hour. But we’d say the hostesses at Geisha House might have a case if they sued for having to wear historically insensitive fashion. (We kid. Sort of.)

4. Hooters. This is the Walmart of hot waitresses (with locations downtown, Hollywood, Santa Monica and beyond): The prices are good, there’s plenty of inventory and no one, it seems, is in a union. But ’80s Dolphin-style shorts, white tennis shoes and white socks are about as anticlimactic as it gets. Any jury with fashion sense would reject a suit by a young woman claiming she was sexually harassed by this ensemble. 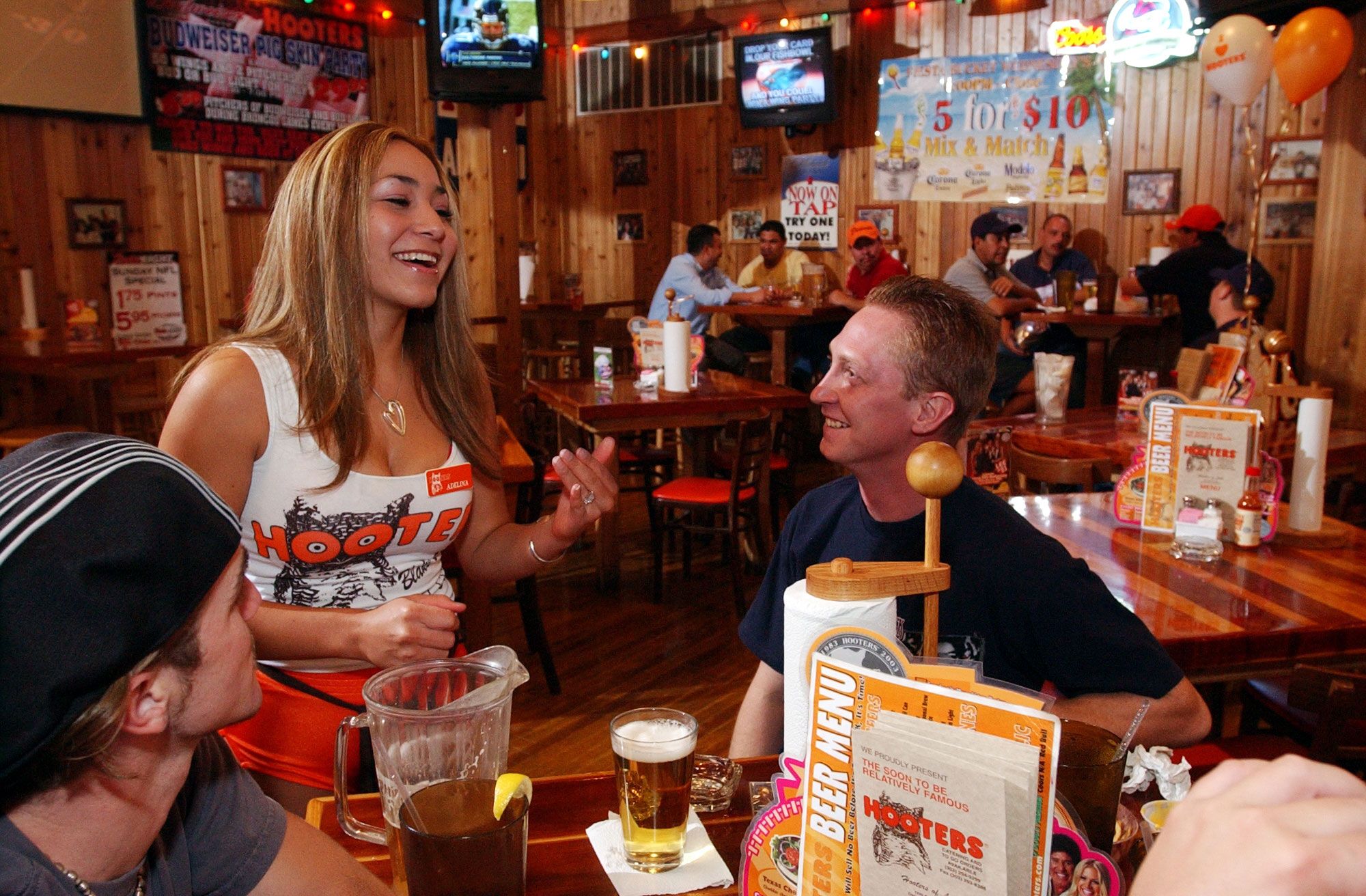 But the real crime here is having the waitresses wear skin-tone pantyhose. Give a hoot, don’t visually pollute with this stuff.

3. Bohemian. Put Korean girls in sexy outfits to serve up beer, Crown Royal and soju to the boys and what do you get? Not much. Short shorts and miniskirts aside, the service here is cold. But the visuals are enough to keep you aware of your surroundings. Do the women here have a case against their employer? Nah: Koreatown bars comprise L.A.’s land of sexually suggestive fashion. A jury would have to consider community standards.

2. Plan B.. Not fair! scream all you other sexy restaurant/bars out there. It’s true. Although Plan B is technically restaurant, it’s more of a bikini bar with food — or a strip club with a menu. The genius of Plan B, however, is that it’s owned by the folks behind 4 Play, about a mile to the northwest in West L.A. Because 4 Play features fully nude dancing, it can’t serve drinks under California alcohol law. Plan B can, so it’s actually a great warm-up spot: 4 Play offers shuttle service between the two. The fashion? It’s as much as you’d want to see with food on your plate, that’s for sure.

1. Cafe Miss Cutie (and all the other bikini coffee shops in Garden Grove and Westminster). The Vietnamese American youth scene in northern Orange County has a bikini-coffee-shop tradition that’s hard to top unless you’re heading to a gentleman’s club (see above). The mix of twentysomething, well-cared-for/worked-out bodies paired with about the smallest bikinis and tallest high heels one can legally get away with (take notes, Hooters) is about as much as a young man can take. And, in fact, some city leaders in O.C. have tried to crack down on these places because, it appears, that many young men can’t take it and resort to violence (with each other).

Anyway, is requiring a barely ass-covering bikini as a part of one’s work attire legal? We don’t know, but we bet Gloria Allred would love to find out.